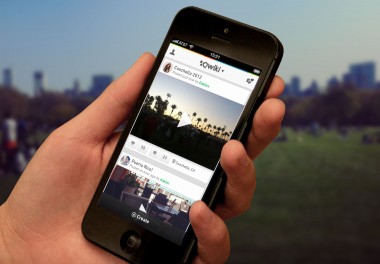 If you’re not super familiar with Qwiki, it could be because the startup has kind of been all over the place. It first launched in 2010 as a video search engine, planting its roots in San Francisco; then migrated to New York last year to launch a video publishing platform, working with media brands like ABC News to help reporters cobble together video reports.

But after seeing mild success with that platform — founder and CEO Doug Imbruce says the iPad version of the app had around two million downloads — Qwiki’s shutting down its website and adopting a new focus, with a mobile-only video app.

It clumps together the media from your iPhone’s camera roll, smartly organizing groups of photos or videos by date, location, and time of day. It selects a song from your iTunes library based on what you’ve been listening to recently. From there, you can throw on a filter, add more media and edit the captions, or, you can just go ahead and create a Qwiki, up to a minute long.

The new, free app hits Apple’s App Store today. An Android app is expected in the next three to six months.

While it might immediately bring to mind Twitter’s new Vine app, Qwiki is quick to point out that this app is supposed to offer more than just a snapshot of a moment. Case in point: My last few Vines were utterly fascinating, Scorsese-like videos of a drained glass of beer and a humdrum train ride, whereas my test Qwiki (below) was a fun, photo-and-video slideshow of a week-long vacation.

“We don’t want to be the world’s 10th video-sharing app. There are plenty of those,” Imbruce acknowledged. “We want to be the first real storytelling app.”

But Vine’s not the only app in the same category. There’s also Socialcam (acquired by Autodesk), Viddy, Keek, Tout, Mobli, Magisto and Animoto, to name several. Animoto might be the closest comparison, although that app charges a monthly fee for full features. Storytelling, social sharing — however you frame it, they’re all about creating and sharing video through mobile.

And it’s hard to say how long this social-mobile-video moment will last, especially as smartphone makers build more sophisticated photo and slideshow options right into phones.

However, I will say there’s something very appealing about the new Qwiki, based on my brief experience with it. It’s super simple to use. Even the Qwikis I didn’t fuss with much turned out pretty well, and they were easy to share via text, email and social networks.